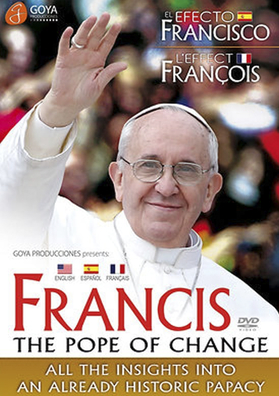 Francis: The Pope of Change

This 52 minutes film shows the striking ascension to the top of World’s popularity of the, at that time, almost unknown Argentinian cardinal,. It also reflects the radical change of the Catholic Church’s image that he has generated. A brief street poll with people of various nationalities and beliefs suggests the extension of this phenomenon.

What can be the causes of such spectacular change in the public opinion? The film gathers the answers from prominent cardinals, experts in social networking such as Gustavo Entrala, vaticanists like John Allen, journalists as María Ángeles Fernández or the Vatican’s chief press officer Federico Lombardi.

“For them, one of the keys of his popularity are the deeds and facts that people have seen Francis doing, which transmit to them simplicity, tenderness, poverty, hope and joy. They all admit feeling a real Francis effect”, says the CEO of Goya Producciones Andrés Garrigó.

Where is Francis leading the Church? What will he actually change? On these question marks the documentary offers the views of the cardinals of Paris, New York, Bombay, Lima, Sao Paulo, Santiago de Chile, Quebec, Seville and Westminster. Their answers open exciting new horizons.

Together with amazing images of this memorable first year, the documentary offers anecdotes humorous details, provoking messages, opinions and clues to understand an already historical papacy.